Today our LDS Humanitarian Services team taught Helping Mothers Survive to over a hundred midwives and doctors in 2 groups here in Atakpamé, Togo. We used the mannequins to test the participants on their response to maternal hemorrhage. The mannequins have a reservoir that can be filled with water which we can dye red to simulate blood. Then the person wearing the "MamaNatalie" apparatus (see: https://www.youtube.com/watch?v=5EgPIcIus4o) can adjust the amount of bleeding based on how the provider responds to the emergency. We drilled them over and over again. I think they will now be more prepared to respond to OB emergencies! 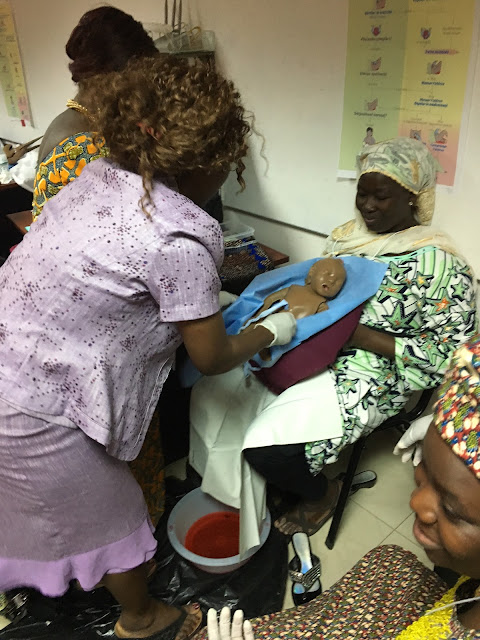 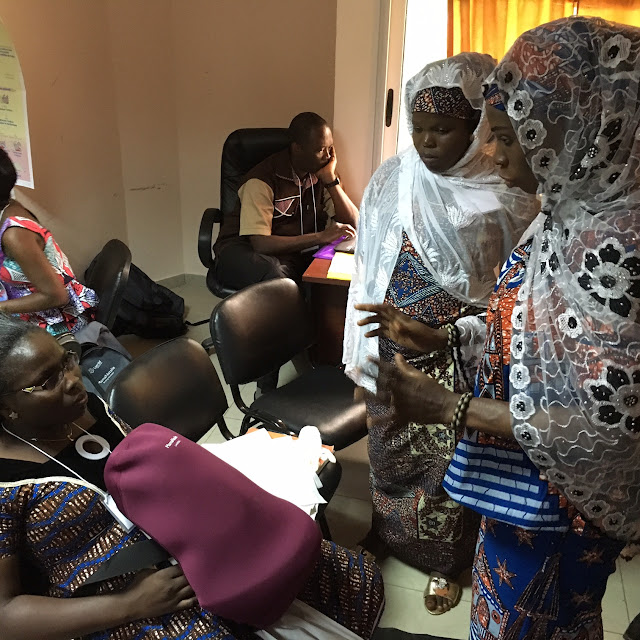 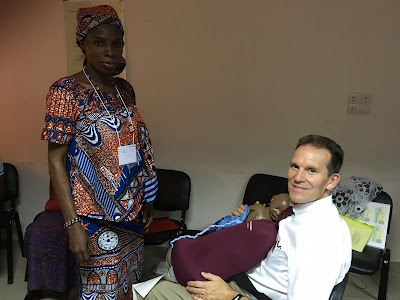 At the end of the day, we distributed participation certificates and "MamaNatalie" teaching kits for the various hospitals. The kit is designed as a backpack so that they can carry it back to their hospitals and keep everything together. There is even a pocket for the flipchart. 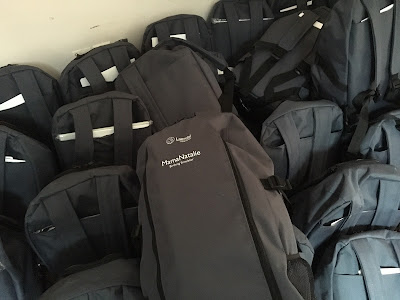 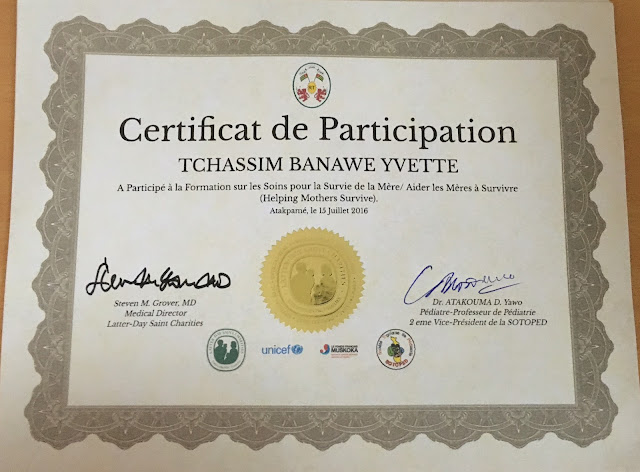 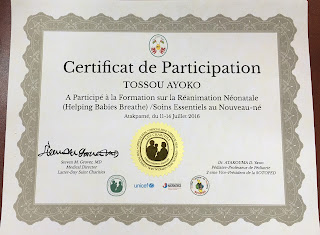 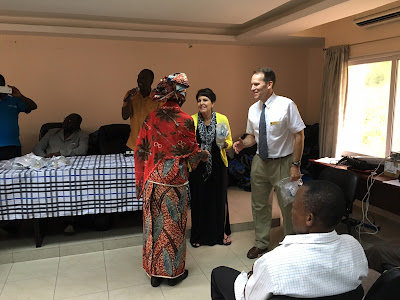 We completed the HBB training today with the 2nd group. At the end of the course we had a closing ceremony. One of the doctors from Togo’s Ministry of Health attended and spoke. I was invited to speak as well, since I am designated the medical director of these courses. I thanked the participants for their hard work and thanked the Ministry of Health, the Pediatric Society and UNICEF for their support. I told them that each participant would be receiving a bag and mask, stethoscope, suction bulb, a CD with all of the course materials and a printout of all the course materials.
Then each facility will receive a bag with a teaching kit which includes the same materials as well as the resuscitation manequin, the flipchart, and about 25 manuals.


I explained that these materials are purchased with money from the Humanitarian Fund of the Church of Jesus Christ of Latter-day Saints. Individual members of the Church throughout the world, donate to this fund because of our belief that each of us is a child of God and that, as the Lord taught, we should love one another. For that reason, we want to help the mothers and babies of Togo and other developing countries through Helping Babies Breathe and Helping Mothers Survive. 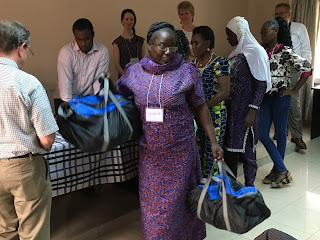 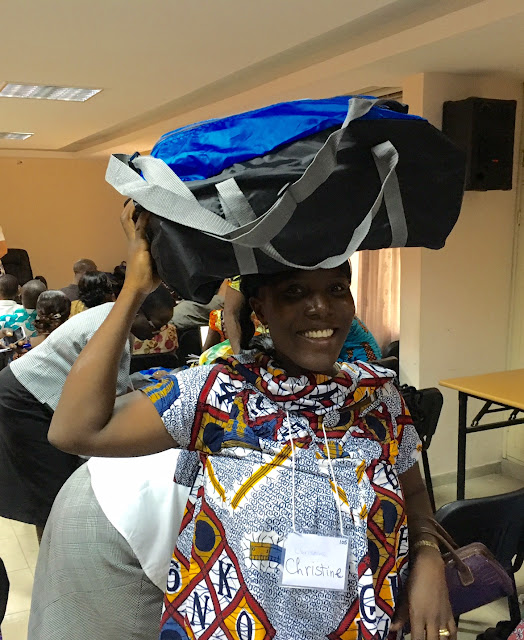 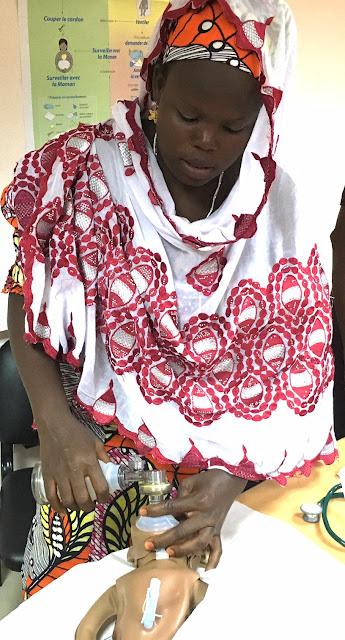 Today we began teaching HBB to our second group of midwives. They work in hospitals of various sizes all around Togo.

They did a great job learning to ventilate a baby who is having problems breathing after birth. Many said that they do not have bag and mask resuscitators at their hospitals, so it will be nice for them to receive this equipment. 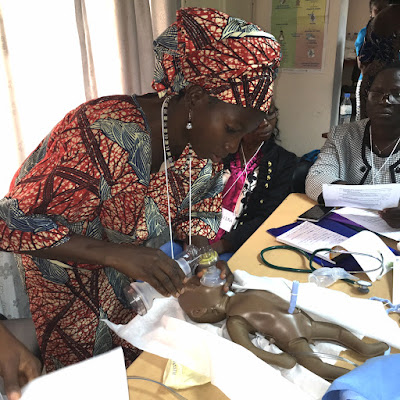 As part of the training, participants are asked to practice teaching with the flipchart. On the back of the flipchart are the corresponding main points that correspond with each image. They did very well teaching each other. 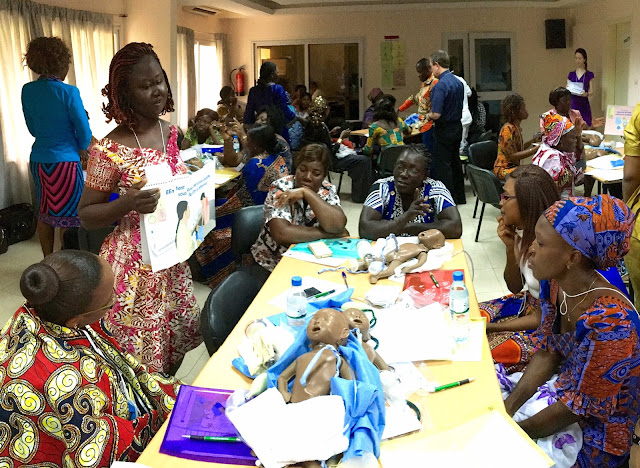 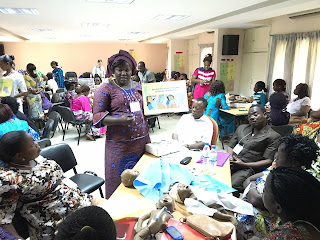 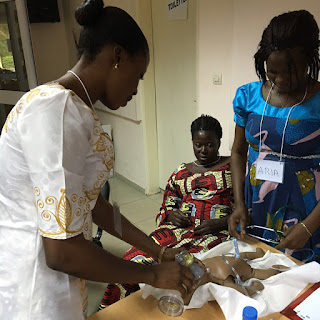 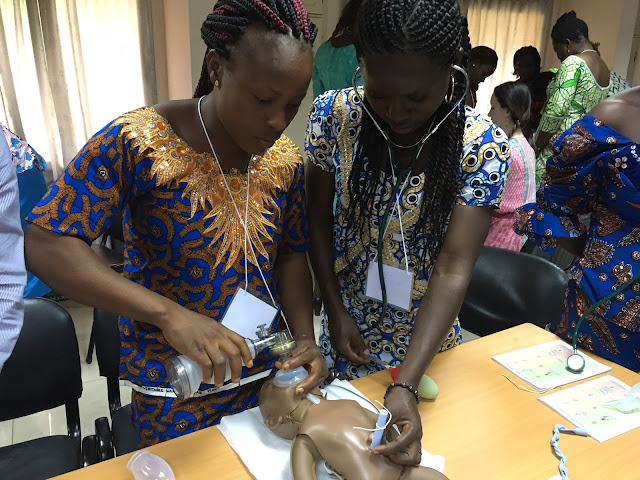 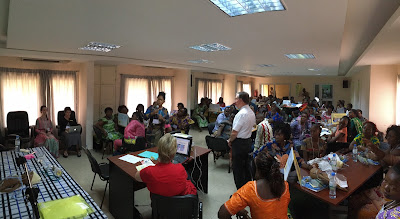 Today we taught the second day of our first 2-day HBB course here in Atakpamé. We had about 50 participants from 46 different hospitals. The midwives did great! Many of them work in small health centers where they work alone with one nurse. The midwives are on call 24/7/365. They live at the small hospital. What dedication! 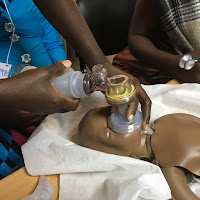 After the course, we prepared the teaching kits and resuscitation equipment that LDS Humanitarian Services will be donating. They will receive this equipment later this week. 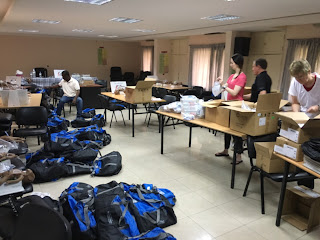 Today we taught Helping Babies Breathe to about 50 midwives who are from the Plateaux and Maritime regions of Togo. The local instructors we trained in Lomé did great! 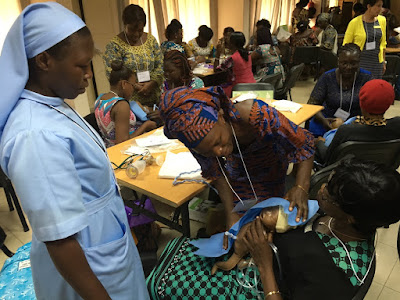 Most said that they do not have a bag and mask available in their hospitals yet. So the bag and mask kits that will be given to them at the end of the course will go to good use. The neonatal resuscitation equipment has been purchased by funds donated to the Humanitarian Fund by members and friends of the Church of Jesus Christ of Latter-day Saints.

Prior to the beginning of the course our Team Leader and I attended the Opening Ceremonies. There were representatives of UNICEF, the Pediatric Society of Togo, and the Regional and National Health Ministries. Except for mine, the speeches were quite formal! The UNICEF  representative said that infant mortality in Togo is now about 27 per 1000 (or just under 3% of births). Maternal mortality is 401 per 100,000 women giving birth.

The press was there, and I was interviewed for Togo TV. 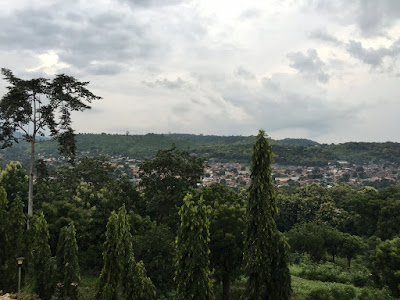 The Sabbath in Lomé 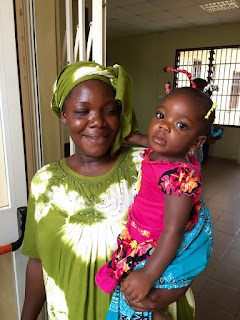 Today we attended Church in Lomé. There are 16 congregations in the Lomé area, but only one chapel. Three of the congregations meet there and the other wards and branches meet in rented facilities around the city. Missionaries will be sent to Kpalime in the next few weeks. This will be the first area outside of the capital where missionaries will labor. 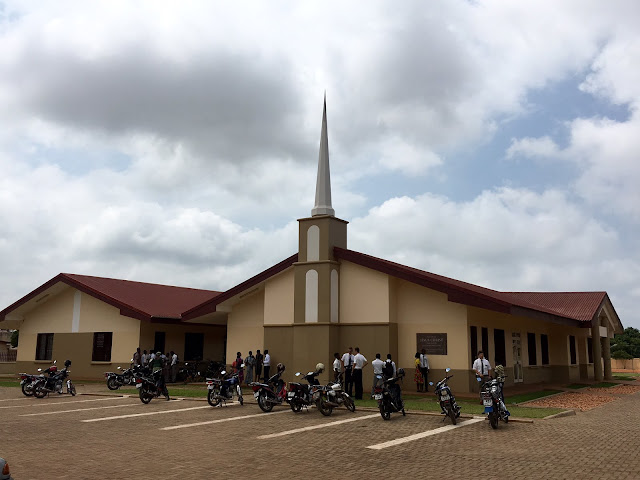 The chapel in Lomé is beautiful. It was built in 2011. It was a wonderful to worship with the saints in Lomé.


Our opening hymn was "How Firm a Foundation."

I love the words of the second verse both in French and in English:

Tonight we had a lovely dinner at the home of one of the pioneers of the Church here in Togo (see my entry from 2013: http://togodoc.blogspot.com/2013/12/the-morning-breaks-shadows-flee-lo.html and https://history.lds.org/article/pioneers-in-every-land-togo-dieudonne-attiogbe?lang=eng).


In returning to our hotel, we drove along a beautiful new highway built by the Chinese. China also built Lomé's new $150M airport where we arrived. 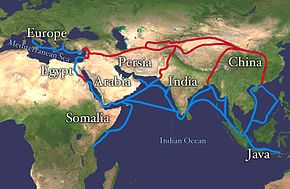 The Silk Road was an ancient network of trade routes that were central to cultural interaction through regions of the Asian continent connecting the West and East from China to the Mediterranean Sea.
The Silk Road derives its name from the lucrative trade in Chinese silk carried out along its length, beginning during the Han dynasty (207 BCE – 220 CE). The Chinese took great interest in the safety of their trade products and extended the Great Wall of China to ensure the protection of the trade route.
Trade on the Silk Road was a significant factor in the development of the civilizations of China, the Indian subcontinent, Persia, Europe, the Horn of Africa and Arabia, opening long-distance, political and economic relations between the civilizations. Though silk was certainly the major trade item from China, many other goods were traded, and religions, philosophies, and various technologies, as well as diseases, also travelled along the Silk Routes. In addition to economic trade, the Silk Road served as a means of carrying out cultural trade among the civilizations along its network.
After his recent state visit to China, Togolese President Faure Gnassingbe spoke of his vision for his country to become the "anchor point" in West Africa for the new Silk Road initiative forwarded by China.
"Togo intends to be the anchor point in West Africa for the New Silk Road initiative supported by China and which is based on ties between countries through land and maritime infrastructures."
The Togolese head of state noted that China is committed to aiding African countries in their economic structural changes. In this regard, he underscored that Togo "possess many advantages to serve as a gateway" for West Africa.
I have also seen China's involvement in the development of other countries in Africa where I have served.
The "New Silk Road" is a development strategy and framework, proposed by Chinese leader Xi Jinping that focuses on connectivity and cooperation between China and other countries in Eurasia and Africa. The strategy underlines China's push to take a bigger role in global affairs, and its need to export China's production capacity in areas of overproduction such as steel manufacturing.
It is interesting to me to see China's influence in Togo as I also have seen it in DR Congo. I can't help but wonder if the U.S. is missing out on an opportunity to strengthen ties with the countries of Africa.